A rich history starting in the 1940s. 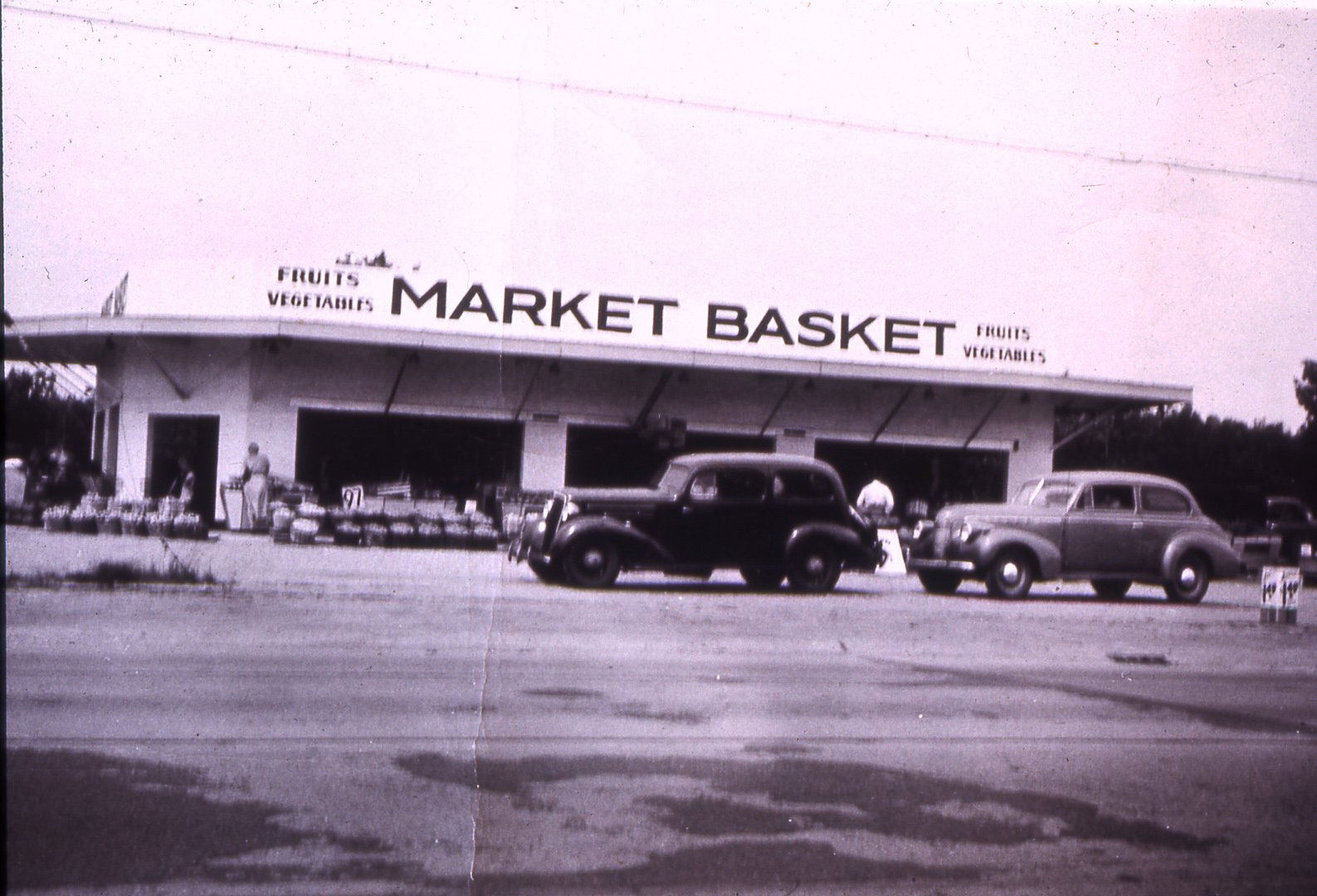 Like most independent garden centers in business today, Flowerland had humble beginnings. Read more for a brief history of Flowerland. The first store, located on the NE corner of Clyde Park and 28th Street, was built on what used to be the Abram J. Longstreet farm. The street Clyde Park got its name from the Clydesdale horses raised on the farm just to the North. 28th Street was then named Beals Road after the farmer who owned property to the East. 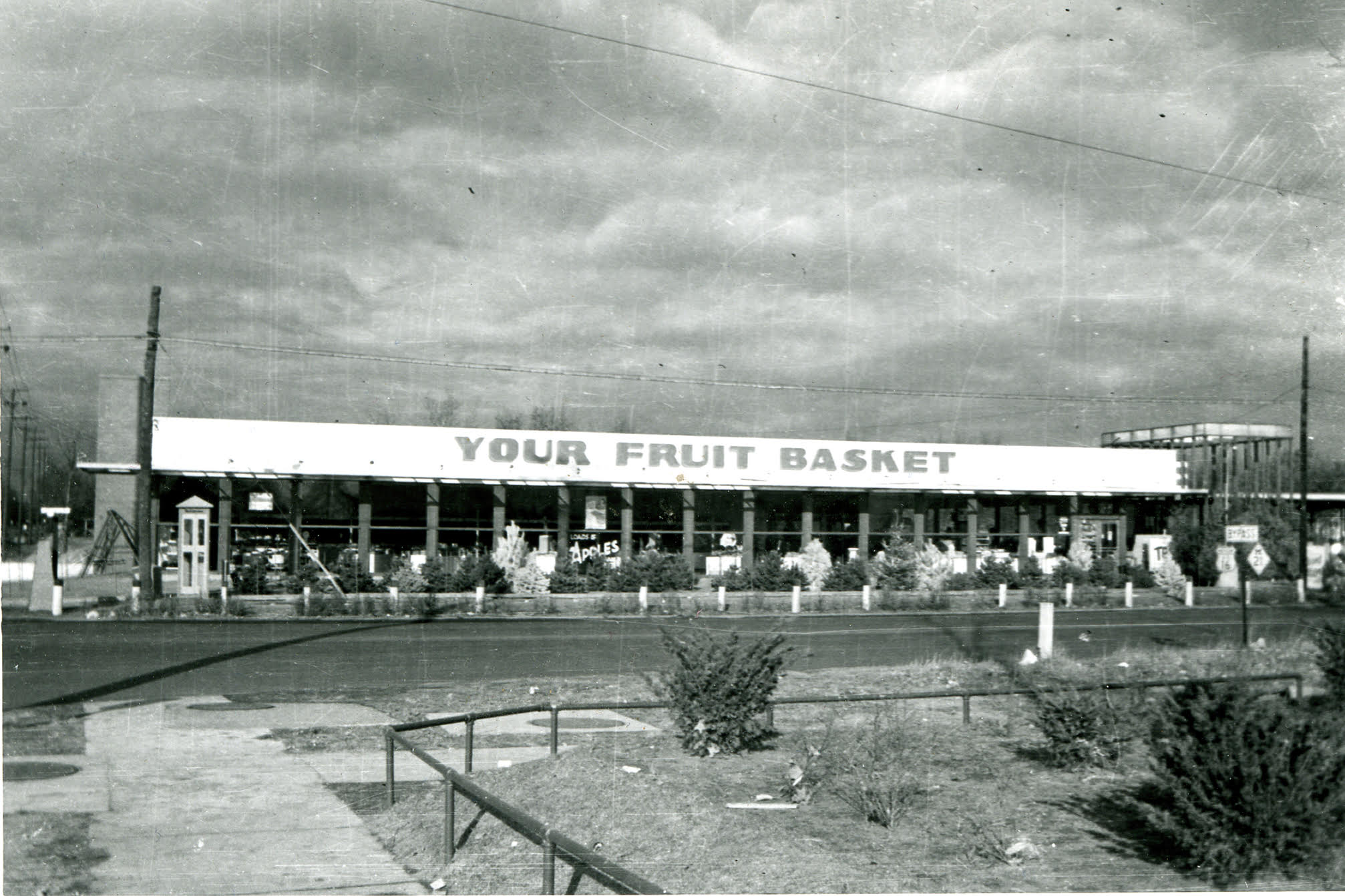 It all began as a fruit stand, when Doris and Bob Tuinstra, sister and brother, began selling produce and gardening supplies after returning from service in World War II. With retail experience as children helping their father Jacob at his roadside produce stands in Grand Rapids, their business quickly grew and their father Jacob became a partner. They called their store “Market Basket”, then “Your Fruit Basket”. 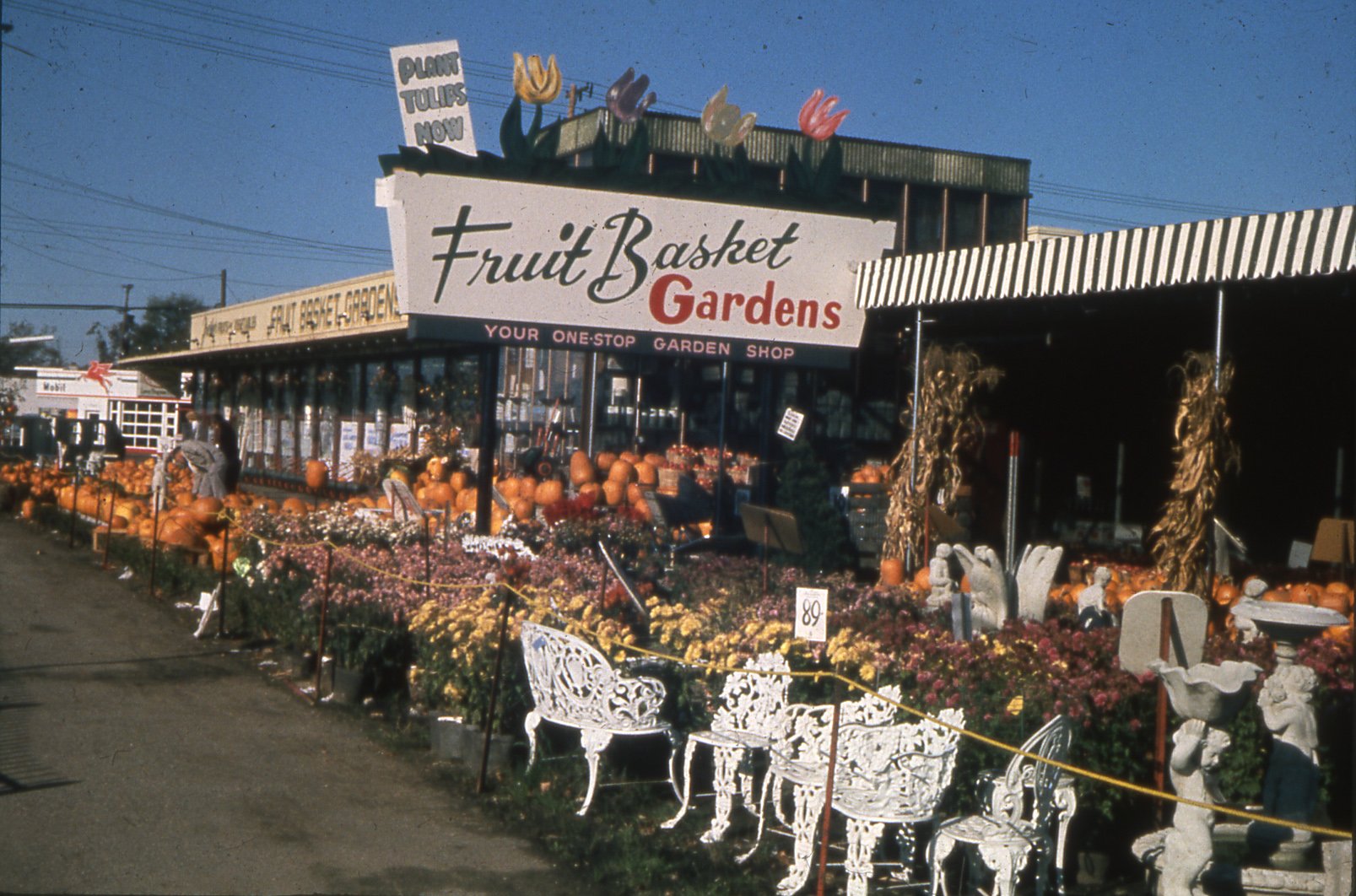 People soon were looking to move out of the city of Grand Rapids. Thus, the Wyoming area quickly turned suburban, with many homes and businesses replacing farmland.

Sid Harkema joined the business in 1953, starting as a part-time sales clerk. He moved on to become the nursery buyer and eventually CEO and Chairman of the Board.

As the area of 28th Street grew in the late 1950’s, it was also known as the “South Beltline”. It was even unofficially named the Miracle Mile because of its rapid growth in businesses. Flowerland expanded too, adding nursery plants, arts & crafts, home décor, and patio furniture to their product offering. Because of this, they officially changed their name to “Fruit Basket Gardens” in 1960. 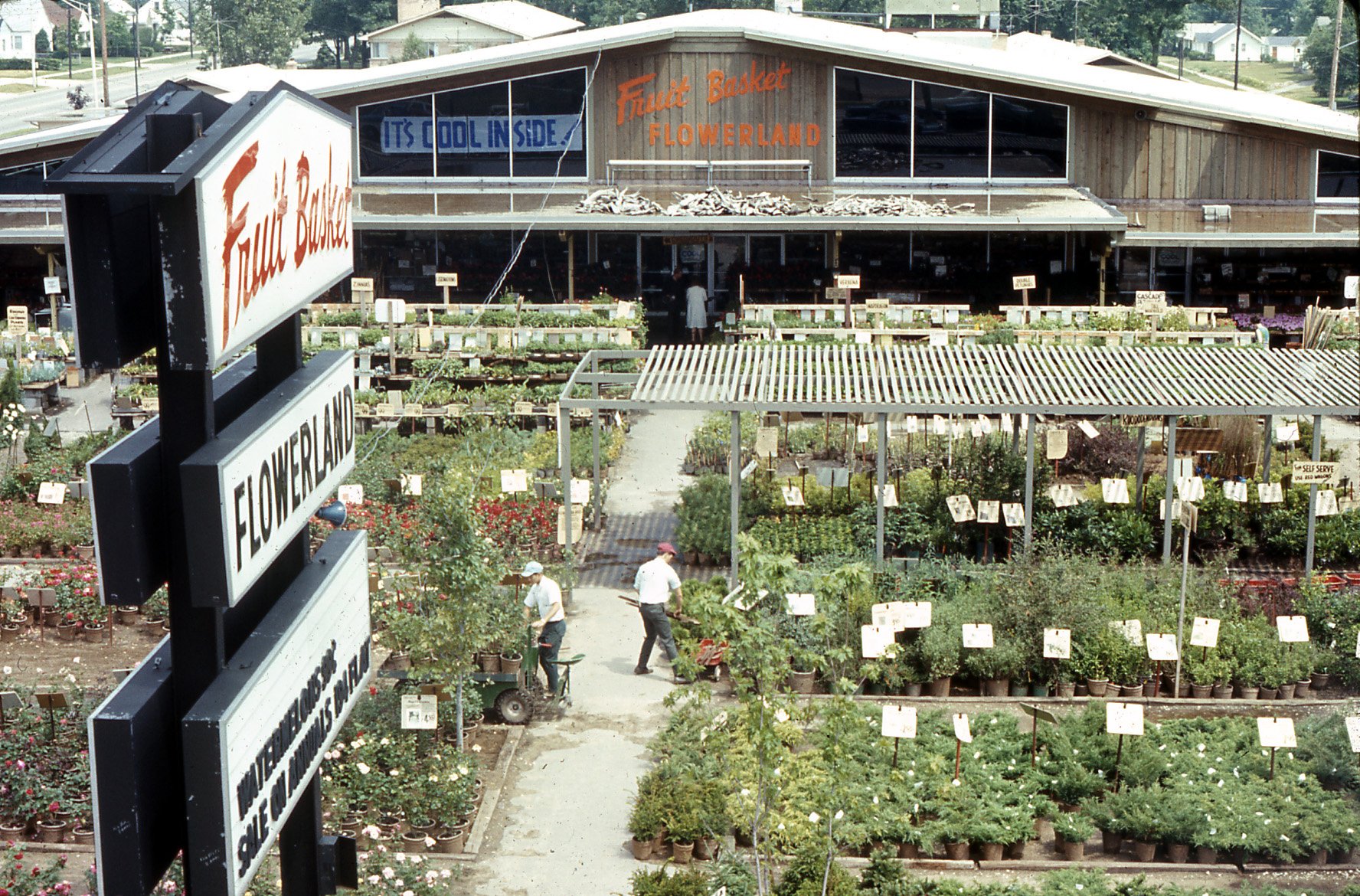 In 1966 construction began on a new building directly behind the existing store and the old building was razed. A 1967 Grand Rapids Press article called them a “department store-type garden center”, as they showcased everything from garden supplies and plants to big Christmas displays and floral shows. People even flocked to the store on bus tours from out of state. They changed their name to Fruit Basket Flowerland to more accurately reflect their character.

After the store in Wyoming was successfully rebuilt the in 1967, Flowerland added a store on Alpine Avenue in 1973.

Flowerland added a store on 28th Street in Kentwood in 1979.

Like Sid Harkema, Rick Vuyst also joined the company as a teenager, working part-time in high school and eventually becoming a plant buyer and then CEO.

Flowerland continued to build its reputation for customer service and solving plant problems. The award winning Flowerland Show on WOOD Radio began in 1993. It continues today, emphasizing knowledge and expertise in gardening while having a lot of pun fun.

Despite deciding to no longer sell fruits and vegetables, the name Fruit Basket Flowerland was so embedded in the community that it was difficult to change the company name to simply be “Flowerland”. 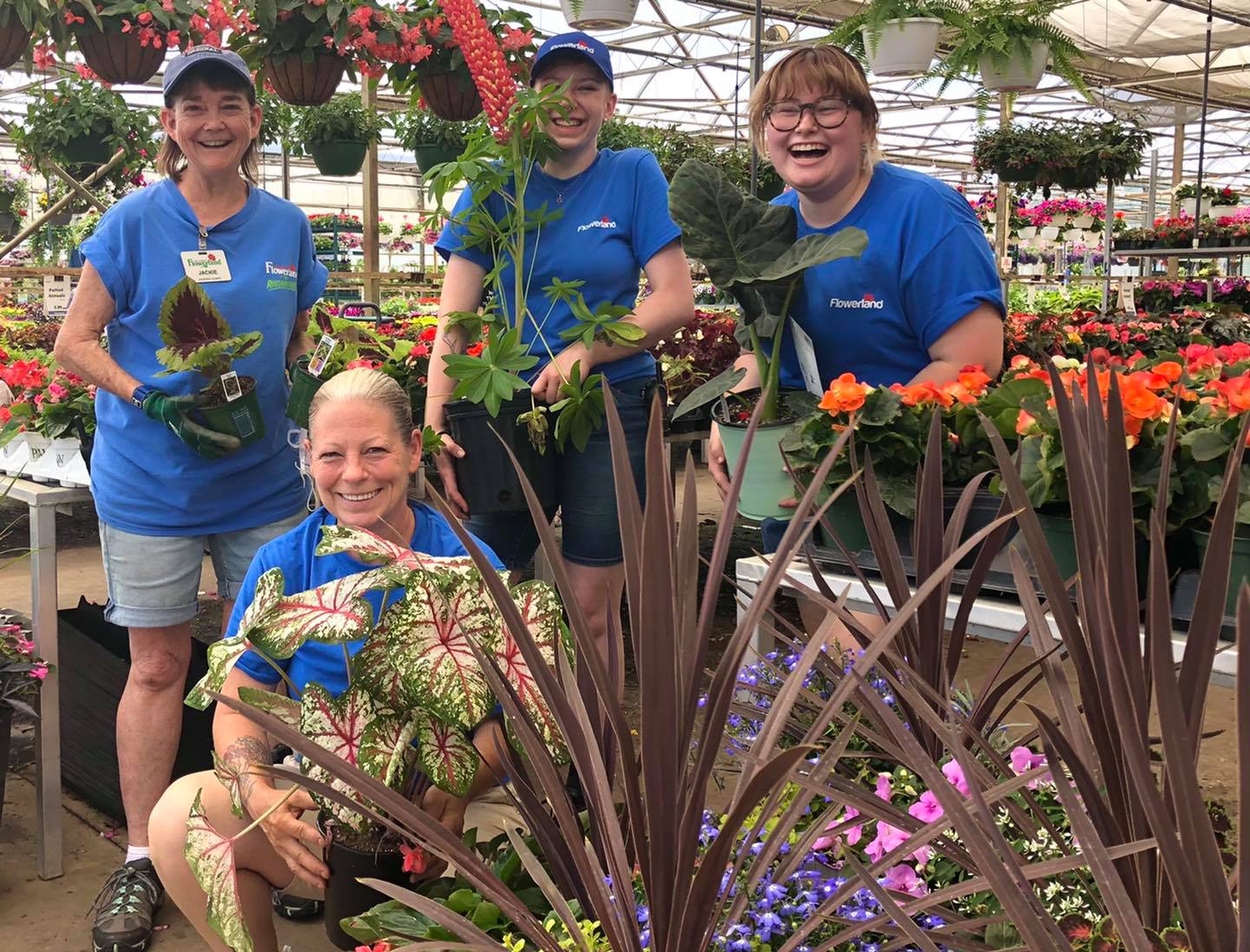 Flowerland history continues with Steve Harkema, CEO, and his sister Sue Jeurink, 2nd generation part-owners. They are leading Flowerland into the 2020’s as Flowerland continues its success at providing beauty, expertise, quality, and a delightful shopping experience.

Flowerland added outdoor living and healthy lifestyles to its focus. Now people can enjoy both gardening and relaxing outside. They continue to develop their diverse product lines to give customers the materials and knowledge to create their own beautiful spaces.

Current staff include many long-time employees who also began their career at Flowerland when young. By discovering a passion for gardening, they desire to share their knowledge and expertise. Many new faces also provide excellent customer service, gardening solutions, and great product selection for the amazing customers who entrust Flowerland with their time and support.

SIGN UP for our emails to be the first to know about sales and promotions!