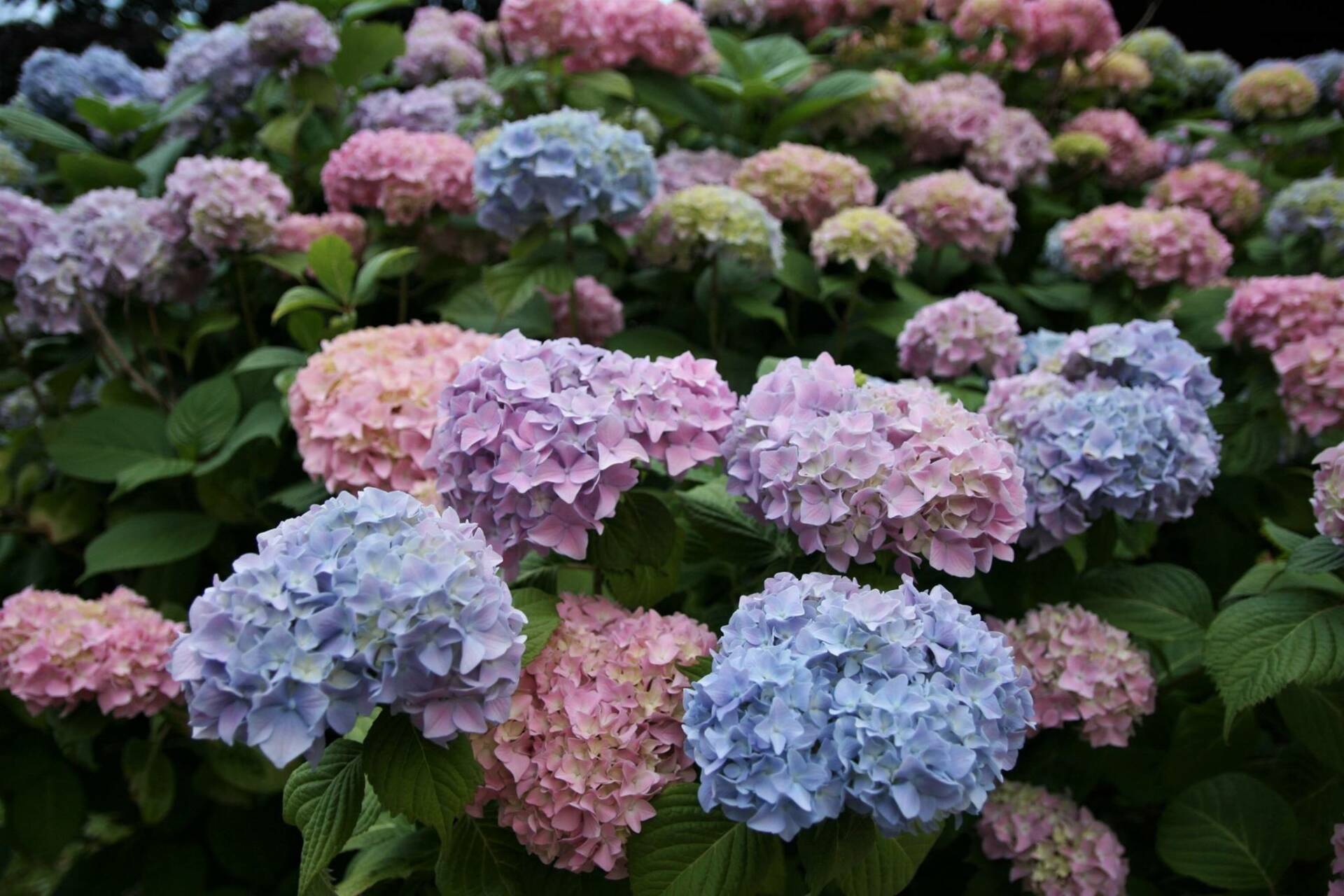 Hydrangea macrophylla are also known as mopheads, lacecaps, hortensia, or florist hydrangeas. The best way to recognize them is as “big leaf” hydrangeas derived from
the name macro (big) and phylla (leaf). You can get them with mophead flowers or with
unique lacecap blooms. Some varieties of big leaf hydrangeas bloom only on the
previous year’s wood (old wood) so avoid pruning them unless you have to.
Deadheading is fine by snipping off the old blooms at the tip down to the first set of
leaves. Today’s new variety introductions bloom on new and old wood and are known
as reblooming or remontant hydrangeas. A remontant plant will produce more than one
crop in a season so these new introductions are more reliable bloomers. Not all reblooming hydrangeas are
equal and some need to reach a certain height to set new wood buds. Planting in an area protected from
winter extremes is helpful. Remember, pruning for size control can be done if needed and will not hurt the
plant. However you just might be pruning out potential blooms for the coming seasons and avoid the
temptation to prune back the leafless “sticks” in your landscape. Deer browsing, shade, pruning or
temperature extremes can cause disappointment in blooming. A big mistake people make is assuming they
are a shade-loving plant. Not true. These hydrangeas will bloom best if they are in a sunny area (4 to 6 hours
of sun) during the growing season. Add plenty of organic matter to the soil because you will have to make
sure they get enough water in the heat of summer (they tend to droop in the heat of day). It is the winter sun,
wind and temperature extremes we want to protect them from. If you drive stakes in the ground to surround
the plant with burlap in winter or fencing to pack with leaves, don’t remove the protection too early in
spring. If buds swell in early spring weather and then we get a hard late spring freeze in the 20’s (April) you
can lose the blooms overwintering from the previous year. You can control the color of some varieties of
bigleaf hydrangeas with an aluminum adjustment but remember the adjustment is to make aluminum in the
soil available to the plant. A pH soil test is necessary to determine how much is needed. The pH test is a
long-term fix, making the aluminum available to the plant. That is why aluminum sulfate is often
recommended to turn mopheads blue as a quick fix. It is easier to turn a bigleaf hydrangea blue than it is to
turn it pink. (Add aluminum sulfate to turn blue; add hydrated lime to turn pink.)

Hydrangea paniculata is also known as Hardy or “pee gee” hydrangea
(Hardiness: Zone 3). This species of hydrangea has panicle shaped flowers that
look like cones so we call them panicle hydrangeas. The key is that they
bloom on the same year’s wood so pruning timing is less critical. If pruning is
needed, prune after blooming or in early spring for beautiful blooms in August
and September. Easy to grow in a sunny area these hydrangeas put on a show
late summer into fall.

Hydrangea arborescens is also known as “smooth” or Annabelle hydrangeas
(Hardiness: Zone 3). They are native to North America and bloom on new wood
(the same year’s wood), making them a hardy, reliable, easy-to-grow plant. You can
prune them back hard in fall.

Hydrangea serrata is a lacecap hydrangea also known as “Mountain”
hydrangea. As opposed to being found in its native Asian element along seaside
regions, it is adapted to mountainous ranges. This gives us a tough big leaf
hydrangea with colorful blooms that tends to be tough and reliable in its blooming
habits. The plant does bloom on old wood so again try to avoid pruning unless
needed. Proven Winners has developed and promoted a mountain hydrangea that is
aptly named ‘Tuff Stuff’ (available at Flowerland) and it lives up to its name.

Hydrangea petiolaris is climbing hydrangea. It grows as a vine and is generally considered a “set it and forget
it” plant – easy to grow with some support. It is hardy, cold hardy to zone 4. It blooms on old wood (previous
year) so avoid pruning if you don’t want to prune out potential flowers.
Hydrangea quercifolia (Oakleaf Hydrangea) is native to North America and
gives 4 full seasons of interest in the landscape in a dramatic way. Also known
as Oakleaf Hydrangea, the plant has oak leaf foliage in spring and beautiful white
flowers in early summer. In fall, it has dark burgundy foliage and in winter
cinnamon exfoliating bark that protrudes through the white snow. It blooms on old
wood so try to avoid pruning unless needed and it appreciates a little winter
protection.

We recommend feeding your hydrangeas with Espoma Flower Tone in spring and summer and consider adding
some Triple Super Phosphate in the fall.